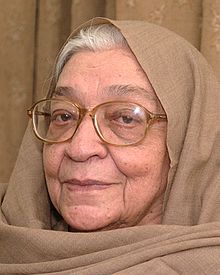 Eminent Hindi Litterateur Krishna Sobti has been awarded the 53rd Jnanpith Award for the year 2017 for her path-breaking contribution to Indian literature.

Jnanpith is the highest literary award of the country.

The Jnanpeeth in a statement said that the language used by Sobti in her writings is influenced by the intermingling of Hindi, Urdu and Punjabi cultures where her characters are always bold and daring – ready to accept all challenges thrown by the society.

Sobti is most known for her 1966 novel Mitro Marajani, an unapologetic portrayal of a married woman’s sexuality. She was also the recipient of the first Katha Chudamani Award, in 1999, for Lifetime Literary Achievement, apart from winning the Shiromani Award in 1981, Hindi Academy Award in 1982, Shalaka Award of the Hindi Academy Delhi and in 2008, her novel Samay Sargam was selected for Vyas Samman, instituted by the K. K. Birla Foundation.

Considered the grande dame of Hindi literature,[6] Krishna Sobti was born in Gujrat, Punjab, now in Pakistan; she also writes under the name Hashmat and has published Hum Hashmat, a compilation of pen portraits of writers and friends. Her other novels are Daar Se Bichchuri, Surajmukhi Andhere Ke, Yaaron Ke Yaar, Zindaginama. Some of her well-known short stories are Nafisa, Sikka Badal gaya, Badalom ke ghere. Sobti Eka Sohabata includes her major selected works. A number of her works are now available in English and Urdu.

In 2005, Dil-o-Danish, translated into The Heart Has Its Reasons in English by Reema Anand and Meenakshi Swami of Katha Books, won the Crossword Award in the Indian Language Fiction Translation category.

Sobti was born in Gujrat, Pakistan, and was educated in India, in Delhi and Shimla. She attended school along with her three siblings, and her family worked for the colonial British government. She initially began her higher education in at Fatehchand College in Lahore, Pakistan, but returned to India when the Partition took place.[9] She worked for two years as a governess to Tej Singh, who was the grandson of the then-Maharaja of Sirohi, in Rajasthan, India. She currently lives in Delhi, with her husband, the Dogri writer Shivnath, whom she married at the age of seventy.

HSB / Guwahati Madhya Pradesh’s Amit Rathore was up against not just the favourite or the No. 1 seed, whe ...