Congress has decided to hold agitations across the country from 15th to 25th October against the government’s policies that have allegedly led to an economic slowdown.

The decision was taken at a meeting chaired by Congress chief Sonia Gandhi at party headquarters in New Delhi today.

Congress Spokesman RPN Singh said, State Congress Committee delegate conventions will be held across the country from 20th to 30th of this month to highlight the current economic situation.

The Spokesman said, the party will also hold Padayatras from October 2nd to 9th to mark the 150th Birth Anniversary of Mahatma Gandhi. He said, the party’s membership drive will also start in October. 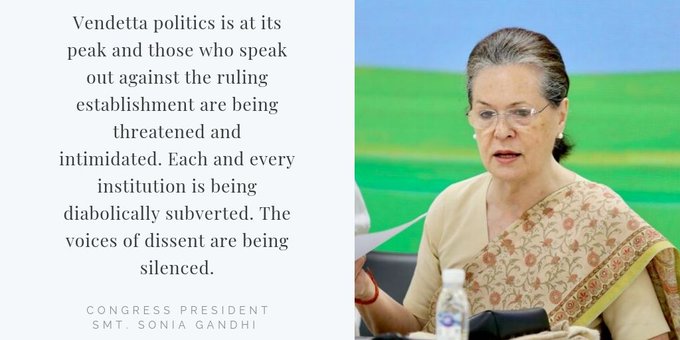 “It is not enough to be active and aggressive on social media. Even though that too is needed, we need to do that better. Far more important is to go to the people directly,” she said.

The Congress, during Rahul Gandhi’s tenure as party chief, had recaliberated its social media plan. The party has aggressively used social media to target the government.

Speaking at the meeting, Sonia Gandhi said the country is looking to the Congress to confront and combat the forces that appropriate Mahatma Gandhi, Sardar Patel, Dr B R Ambedkar and misrepresent their true messages for their nefarious ends.

“We must stand up fearlessly to fight on the streets, fight in villages, towns and cities. We must have a concrete agitational agenda on issues of pressing concern to the people, whether they be economic or social,” she said.

“We are soon going to have elections in three states. The situation is challenging and it is only if we keep party interests and nothing else other than party interests uppermost in our minds, that we will regain our lost position,” she added.

Sonia Gandhi, who took over as party chief months after the Congress faced a drubbing in the Lok Sabha polls, said states ruled by the party should emerge as model states.

These states must stand out as examples of sensitive and responsive governance, accountable and transparent administration, she said.

“We must be seen to be fulfilling our manifesto commitments. If not, we will lose people’s support with obvious consequences,” she added.